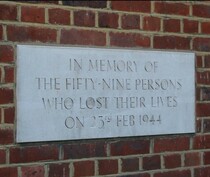 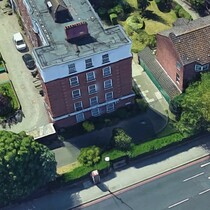 In memory of the fifty-nine persons who lost their lives on 23rd Feb. 1944.

Our photo of the plaque comes from Gary Hartwell's Flickr page. He brought it to our attention way back in 2007  We have recently visited but access to the grounds around the flats is gated and we didn't feel comfortable ringing bells to get in. So we hope Gary doesn't mind us using his close-up photo. And for the long-shot we just got out our Google helicopter. We reckon you can see the white rectangle low on the corner to the right, that's towards the west on the north-facing elevation.

Gary Hartwell wrote: "My Dad's family lived there during the war and were bombed out in this raid. Our blog gives more about the World's End.  This is a random series of observations and links inspired by "World's End: A Memoir of a Blitz Childhood" by Donald Wheal. My Dad, Dennis Hartwell (brother of Stan) lived next door to Donald at No.4, Guinness Trust Buildings and shared the traumatic experience Donald relates at the end of his book."

The block was rebuilt and named for the superintendent Samuel Robert Caple and his wife Mabel Anne Caple, who lived at number 81 and were killed in the attack.

At the time of the attack we believe the estate was known as the Kings Road tenements.

This section lists the subjects commemorated on the memorial on this page:
Guinness Trust Buildings WW2 attack

From Guinness Partnership History: "The biggest single loss of life at The Gu...

A large commemoration, situated inside the porch of Bentley House.