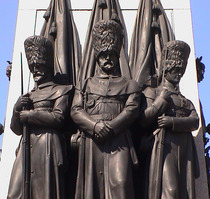 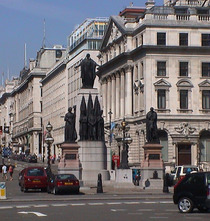 {On the two sides there are shields, surrounded by oak leaves, bearing the words:}
Alma Inkerman Sebastopol
{carved in the stonework, on each side:}
Crimea
{On the back is an ornate plaque/shield, surrounded by oak leaves, bearing the words:}
To the memory of 2162 officers, non-comd. officers and privates of the Brigade of Guards who fell during the war with Russia in 1854 - 56.
Erected by their comrades
{In the front stone work, at the left below the guards' feet, rather faint, is inscribed:}
John Bell

{At the bottom front right, 2 small brass plaques are attached:}
The Guards Memorial was pulled down in the year of our Lord 1914 and was re-erected 30 feet north of its original position in order to permit the erection of the Florence Nightingale and Sidney Herbert statues.
{and:}
The foundation stone of the Guards Memorial was laid in the year of our Lord 1859 by Margaret Johanna Bell

The 3 guardsmen are cast from captured Russian guns. The guns displayed at the rear are those used at the siege of Sebastopol.  This was the first public memorial dedicated to all ranks.  Prior to this the lowly private had not been thought of as statue material, as indicated by the Duke of Wellington's 1831 opinion of conscripts as "the scum of the earth".

This section lists the subjects commemorated on the memorial on this page:
Guards

Brigade of Guards members who fell in Crimean War

2,162 officers, non-commissioned officers and privates of the Brigade of Guar...

This section lists the subjects who helped to create/erect the memorial on this page:
Guards

Sculptor. Born Norfolk though his family home was in Suffolk. On the Albert M...

This section lists the other memorials at the same location as the memorial on this page:
Guards

The "Give thanks" phrase does not appear to be a quotation, as we first thoug...