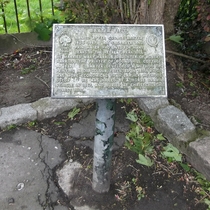 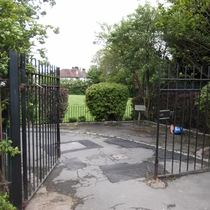 {Between the Sydenham Society and Lewisham Borough Council logos:}
Baxter Field named after George Baxter 1804 - 1867. An engraver and printmaker who lived for many years in The Retreat, Peak Hill. He married Mary Harrild, daughter of Robert Harrild, the printer of Round Hill Cottage in 1827. Baxter developed a method of printing in oil colour, patented in 1835, which was more economical than earlier methods used. He was killed by a horse drawn vehicle in 1867 and buried at Christchurch, Forest Hill.

There is a house, still extant, called Round Hill Cottage but Harrild lived at the big house, Round Hill House, no longer standing.

This section lists the subjects commemorated on the memorial on this page:
George Baxter - SE26

George Baxter's wife was living here in 1865 when he joined her and stayed un...

Artist and craftsman. Born Lewes. 1825 moved to London and married his cousin...

Printer and engineer. Born in Bermondsey, where in 1801 he set up the Bluecoa...

This section lists the subjects who helped to create/erect the memorial on this page:
George Baxter - SE26

A civic society formed with the aim to be 'A voice for Sydenham and to make i...

{Next to an image of the Virgin Mary:}Shrine of Our Lady of HalThe catholic c...