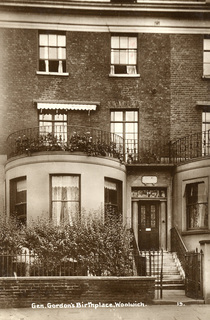 {The photo does not allow us to read the inscription.}

The photo of the house showing the plaque, c.1920, comes from Plumstead Stories.

Rosemary and Richard Christophers of The Lightbox, previously Woking Museum, have put paid to the rumour that the plaque is held by that museum. They also kindly inquired of Gordon's School whether it is held there, but no, the School don't have it either. This plaque really does seem to well and truly lost.

This section lists the subjects commemorated on the memorial on this page:
General Gordon's birth place - lost plaque, oblong

This section lists the other memorials at the same location as the memorial on this page:
General Gordon's birth place - lost plaque, oblong

Legendary Shepherd's Bush rock band, The Who, performed here at the site of t...