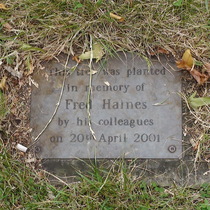 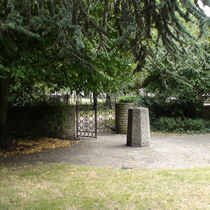 This tree was planted in memory of Fred Haines by his colleagues on 20th April 2001.

The tree-less plaque is in the lawn some distance to the right, outside our photo, which was taken from inside the garden.

Concerning Furnivall Gardens generally, a nearby information board informs: "The gardens are named after Dr Frederick James Furnivall, 1825 - 1910, a distinguished scholar of English literature and an important figure in the development of the sport of rowing. In 1896 he founded the Hammersmith Sculling Club for Girls and Men, now called the Furnivall Sculling Club, whose premises are in Lower Mall.

Furnivall Gardens cover the area which was formerly the mouth of the Hammersmith creek, an outlet into the Thames from Stamford Brook. In 1936 after the decline of the fishing industry in the creek harbour in the early 19th century, the creek was filled in and the water channelled through an underground culvert.

Many of the buildings in the creek area were destroyed by bombing during World War II and, in 1948, the council created an open space in this area, to be used during the Festival of Britain. A walled garden was constructed on the bombed site of what had, since 1765, been the Friends' Meeting House and burial ground.

Furnivall Gardens and Hammersmith Pier were opened on 5th May 1951."

The pier was built as a dock where festival-visitors could board a ferry to the Battersea and the South Bank.

The 1954 film Impulse has a scene at about 44 minutes where the characters arrive at Dove Pier and walk across Furnival Gardens. The camera briefly shows some of the large buildings on the other side of the Great West Road, and before that a windowed ruined wall which seems to stretch northwards from what is now River House, across the Gardens to the Great West Road.

This section lists the subjects commemorated on the memorial on this page:
Fred Haines

We can find nothing about Haines, who died not long before 20th April 2001.

This section lists the other memorials at the same location as the memorial on this page:
Fred Haines

{Around a pair of clasped hands, the initials PBS and the motto 'Unitate Fort...

The Old Schools This is the original building at Harrow, finished in 1615 and...

Thurloe lived at No. 24 Old Buildings, near the Gatehouse, during the time o...