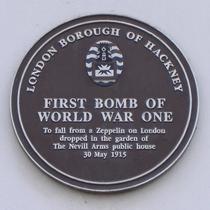 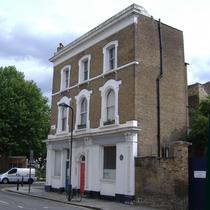 London Borough of Hackney
First bomb of World War One to fall from a Zeppelin on London dropped in the garden of The Nevill Arms public house, 30 May 1915.

Londonist posted about a nearby house,16 Alkham Road, with a plaque claiming a similar title: the first London house hit in an air raid. We initially thought this Osterley Road plaque disproved that claim but the first Zeppelin raid on London was definitely on 31 May so this plaque has the date wrong and the Alkham Road house wins this undesirable accolade.

Credit to Ross Corben who first told us about this plaque and then to our friend at the Soho Society, Roger Shlomo Harris, who went along with his camera. And also to Simon Dowse who told us, October 2015, that the plaque has gone missing. And then to Alan Patient who forwarded this link which explains that this Osterley Road plaque was indeed a mistake - the bomb fell here on the 31st (not the 30th) and, crucially, after the Alkham Road bomb.

Hackney are probably rather embarrassed by this plaque. We certainly are now heartily sick of it and glad to know that it will not return!

Sorry, one more thing: Hackney have a photo of PC Edmund Forbes posing with this bomb, with "169 lbs" written on it. Since they were using incendiaries we guess the bomb itself could survive the damage.

This section lists the subjects commemorated on the memorial on this page:
First Zeppelin bomb of WW1 - incorrect

This section lists the subjects who helped to create/erect the memorial on this page:
First Zeppelin bomb of WW1 - incorrect

Druid Street arch bombing. On October 25th 1940 a bomb fell through the railw...

The Mousetrap The world's longest running play had its 50th anniversary perfo...