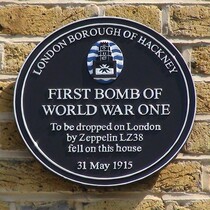 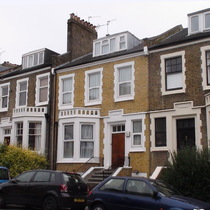 First bomb of World War One, to be dropped on London by Zeppelin LZ38, fell on this house, 31 May 1915.
London Borough of Hackney

Commemoration of this event has had a chequered history. First Hackney mistakenly erected a plaque on the wrong building. That plaque then went missing, with no explanation, and then, c.May 2015, this one (1) was erected but, Google Street View shows, it had gone by November 2015 and by August 2017 plaque 2 arrived. Plaque 1 looks like a quick stop-gap; plaque 2 is the standard Hackney design for plaques.

Our photo of plaque 1 comes from Loving Dalston, which has a good post about this event. Londonist points out that this was the first time London had come under military attack by a foreign power since the arrival of William the Conqueror in 1066, but he only torched Southwark which at the time was not part of London, so one could argue: since the Viking attacks of Anglo-Saxon London.

This section lists the subjects commemorated on the memorial on this page:
First Zeppelin bomb of WW1, correct - 2

This section lists the subjects who helped to create/erect the memorial on this page:
First Zeppelin bomb of WW1, correct - 2

This section lists the other memorials at the same location as the memorial on this page:
First Zeppelin bomb of WW1, correct - 2

The University has a grainy film of the ceremony when this stone was unveiled...

The Sutton Dwellings, Islington, These dwellings were erected under the chari...

Site of St Mary Bothaw, destroyed in the Great Fire 1666.The Corporation of t...