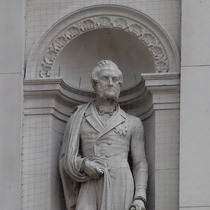 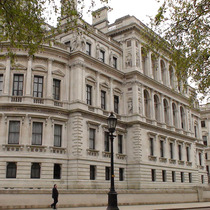 We would appreciate some help identifying these fine gentlemen. Seems likely that they are the eight Foreign Secretaries who in about 1870 were deemed the most worthy of a statue. Wikipedia provides lists of these chaps, with pictures - about 25 (some served repeatedly).  Stephen Brasher has had a go at identifying those honoured with a statue and he suggests statue E might be George Hamilton-Gordon 4th Earl of Aberdeen.  We agree with the suit but the hair-line is not persuasive.   Would anyone else like to have a go at this game of statue snap?

This section lists the other memorials at the same location as the memorial on this page:
FCO - E unknown