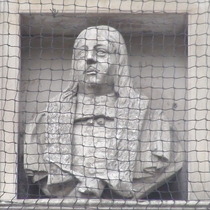 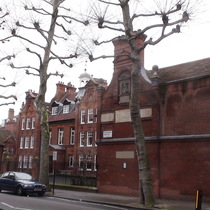 {Left-most plaque:}
Anno domini 1850. A donation of £1500 3 per cent annuities was made to this institution by Mrs Hannah Sara Chadwick in memory of her late husband, James Chadwick Esq. a much respected inhabitant of Westminster and Governor of this charity, the interest thereof to be divided amongs the poor almspeople in addition to their present allowances.
William Freeman Treasurer.

{Right-most plaque:}
Anno domini 1860. A further donation of £1500 3 per cent annuities was made to this charity by Mrs Hannah Sara Chadwick making with her former donation the munificent sum of £3000 like 3 per cent annuities the interest thereof to be devoted to the increase of the stipends of the almspeople for ever.
William Freeman Treasurer.

{Lower plaque, identical to that at the Palmer bust:}
These buildings are the United Westminster Almshouses, erected AD 1882, following a scheme of the Charity Commissioners dated 11th July 1879 for the consolidation of the almshouses in Westminster founded by the Reverend James Palmer AD 1656, Mr Nicholas Butler AD 1675 and Mr Emery Hill AD 1708. Further particulars of this charity are inscribed upon the stone tablets above.

These Almshouses include two similar blocks, with other buildings in between. The end wall of the southern block carries the James Palmer bust with Hill on the northern block.

This section lists the subjects commemorated on the memorial on this page:
Emery Hill bust

In 1850 she donated some funds to the Emery Hill almshouses in memory of her ...

Inhabitant of Westminster and Governor of the Emery Hill Almshouses.  Husband...

Brewer and benefactor in the parish of St Margaret Westminster. In 1708 found...