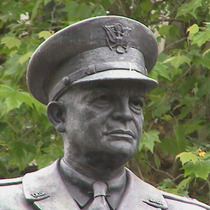 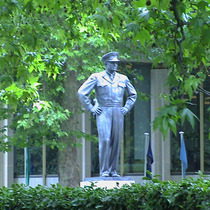 {On the front, north-east, face of this five-sided plinth, and then going clockwise:}
Dwight David Eisenhower
{five carved stars in a circle}
1890 -1969

{On the third face of the plinth:}
First Inaugural Address, January 20, 1953.
The faith we hold belongs not to us alone but to the free of all the world.

{On the fourth face of the plinth:}
Order of the day, June 6, 1944.
Soldiers, sailors and airmen of the Allied Expeditionary forces! You are about to embark upon the great crusade . . . . The hopes and prayers of liberty-loving people everywhere march with you.

{On the base of the statue:}
Robert Dean, Sculptor

{The ground immediately below the plinth is inlaid with 5 large stars, and further out:}

{An oblong brass plaque:}
This memorial was given by residents of Kansas City, Missouri, in recognition of the service of their fellow citizens, Ambassador and Mrs Charles H. Price, II at the Court of St James’s, 1983 -1989.
January 23, 1989

{A round brass relief with the spread eagle and:}
Seal of the President of the United States

Portland stone plinth. Bronze statue. Unveiled by Mrs Thatcher and Charles Price. Note that Eisenhower was raised in Kansas City, hence the locals' interest in him.

This section lists the subjects commemorated on the memorial on this page:
Eisenhower statue

This section lists the subjects who helped to create/erect the memorial on this page:
Eisenhower statue