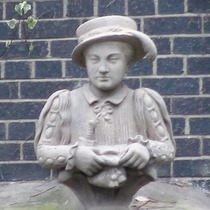 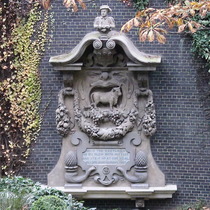 A gaping mouth about to chomp on a whole ox; pineapples sprouting from pipes instead of smoke - this strange terracotta sign was originally set high on the facade of the now demolished Queen's Hotel in nearby St Martins-le-Grand. It commemorated the Bull and Mouth Inn which was demolished in 1830 to make way for the Queen's Hotel which was itself demolished in 1888 and replaced by a building for the GPO.

Spitalfields Life describes this green enclave as "a hidden garden spiralling down to a large closed door, just as implacable as the blank walls upon the exterior." and goes on to visit the "mausoleum {where are stored} the fourteen thousand human remains in the Museum’s collection".

This section lists the subjects commemorated on the memorial on this page:
Edward VI at the Bull & Mouth

This section lists the other memorials at the same location as the memorial on this page:
Edward VI at the Bull & Mouth

We original thought this was Gladstone (who had died only a few years before)...