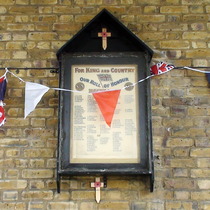 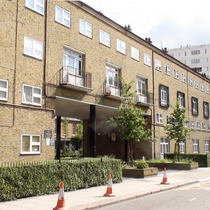 For King and Country
{Union Jack}
Our roll of honour - Draycott Avenue
{On either side is a pair of crossed flags - see our commentary.}

{List of 108 names, grouped by initial letter of surname and in almost alphabetical sequence but there are a few errors, e.g. the two Dorrells, are separated by a Dagnell.}

The memorial is hand-made and all the better for it.  The serif typeface is unique and ornate. Framed and boxed behind glass, the manuscript is also in a large covered area and so is in excellent condition. The bunting indicates to us that the memorial is valued by the residents but it created a test of our photographic skills - if it had not been a windy day we would not have managed a full transcription.

Partly because the memorial doesn't specify we can safely assume that the war commemorated is WW1.

The crossed flags at the left are those of France and Russia; at the right, France and Japan. We believe these together with the Union Jack represent the alliance known as the Triple Entente, between, primarily, France, Britain and Russia, and also Japan and Portugal.  We can’t explain why the Japanese flag is here but not the green and red flag of Portugal, nor why the French one appears twice.

2021: we published another similar memorial, of which only a photograph remains.

This section lists the subjects commemorated on the memorial on this page:
Draycott Avenue war memorial

In a house on this site Thomas Chatterton died August 24th 1770. Corporation ...

St Mary Abbots GardensThe replacement of the railings and the restoration of ...

This stone was laid for the glory of God by Commissioner Adelaide Cox on beha...

Plaque unveiled by the husband and wife actors Timothy West and Prunella Scales.