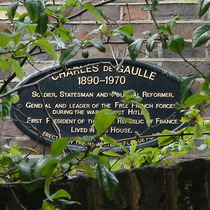 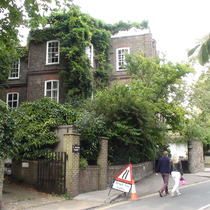 Charles de Gaulle, 1890 - 1970, soldier, statesman and political reformer, general and leader of the Free French Forces during the war against Hitler, first President of the Fifth Republic of France, lived in this house.
Erected by the Hampstead Plaque Fund.

De Gaulle lived here with his family, September 1942-44 (though these dates vary depending on source).

The plaque is not visible in our photo of the house; it's barely visible from the street. On the side of the house, it can be seen by peering over the top of the wall to the very right of our photo.

2017: We were contacted by Chris Kitching who is writing a book about Walter Rye, the athlete and antiquary, who lived at Frognal House 1891-9. His book (due end of this year or beginning of next) has a short section about the house.

This section lists the subjects commemorated on the memorial on this page:
Charles de Gaulle - NW3

This section lists the subjects who helped to create/erect the memorial on this page:
Charles de Gaulle - NW3

William Butler Yeats, Irish poet and dramatist, lived in this house, then kno...