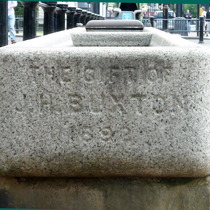 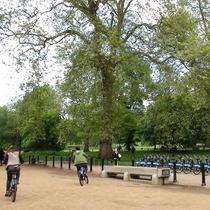 This trough was originally installed in 1892 at Victoria Embankment, "near Temple Precincts" which must mean somewhere between Temple Place and Temple Avenue. It was moved here in 1985 as a memorial to the horses killed by the bomb.

This section lists the subjects who helped to create/erect the memorial on this page:
Buxton water trough - Hyde Park

Our colleague, Andrew Behan, did some searching and at the Cambridge Alumni D...

This section lists the other memorials at the same location as the memorial on this page:
Buxton water trough - Hyde Park

{Plaque on the south end:} This trough was donated to the City of London in 1...

The book-selling business set up by her husband still trades as Sotheran's Ra...

The inscription text is taken from a modern (and indeed rather nasty) plaque ...

Donated in 1950. The surrounding terrace layout was designed by Goetze in co...