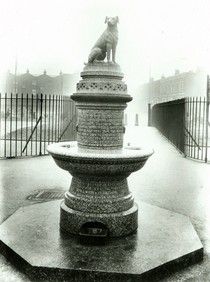 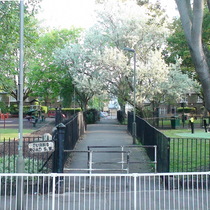 {Inscribed on the central column below the basin:}
In memory of the brown Terrier dog done to death in the laboratories of University College in February 1903 after having endured vivisection extending over more than two months and having been handed over from one vivisector to another till death came to his release.

{Inscribed on the central column below the basin:}
Also in memory of the 232 dogs vivisected at the same place during the year 1902. Men and women of England how long shall these things be?

The structure is a reasonably standard late Victorian drinking fountain, in granite, with a basin for humans and a bowl lower down for dogs.

Vivisection was a hot topic in late Victorian-Edwardian Britain. The 1878 Cruelty to Animals Act put certain restraints on how the experiments should be carried out, but also made a successful prosecution unlikely. Physiologists were using vivisection to make important discoveries (hormones, peristalsis, etc.) but there was vocal opposition from various quarters: such as feminists, Thomas Hardy, Jerome K. Jerome, Rudyard Kipling and Queen Victoria.

Two Swedish feminists, Lizzy Lind af Hageby and Leisa Schartau, infiltrated lectures where vivisection was used, at London King’s College and University College, and kept diaries of what they witnessed, in particular the repeated operations suffered by one particular brown dog. They shared these diaries with the barrister Stephen Coleridge (great-grandson of Samuel Taylor Coleridge) secretary of the National Anti-Vivisection Society. He publicised the experiences of the brown dog and accused the physiologists of torture. One of them, William Bayliss, sued Coleridge for libel. Bayliss won but the trial (1903) brought yet more opportunity for the ant-vivisectionists to publicise their campaign.

After the trial Anna Louisa Woodward raised funds and commissioned this memorial to the brown dog. With the 1896 ‘National Anti-Vivisection and Battersea General Hospital’ at the south-west corner of Battersea Park, and Battersea Dogs Home at the south-east corner, Battersea seemed a good location for the bronze statue, and the Council offered this site in the green space at the centre of the developing Latchmere Estate.

However medical students who had always supported the case for vivisection, took exception to the statue and the inscription. Groups of students attacked it with crowbar and sledgehammer; protested in Strand near King’s College waving miniature brown dogs on sticks; violently disrupted suffrage meetings, and ant-vivisection meetings; etc. Police protection of the statue was costly and the council talked of resolving the problem by removing the statue. This prompted large demonstrations in favour of the statue, with some supporters wearing dog-masks; petitions were raised; rallies at Trafalgar Square, etc.

On 10 March 1910, early in the still dark morning, 4 workers protected by 120 police officers removed the statue, and it was melted down by a council blacksmith. That seems to have ended the "Brown Dog Affair".... until 1985... see our page for the modern statue.

The photo of the statue comes from Wikipedia and initially we were puzzled by the buildings and roof-line in the photo since they don't tally with any of the surrounding buildings that can be seen there today. The Latchmere Estate south of the recreation ground was built by 1903 but we learnt, at UCL (ironic since that's where the brown dog was vivisected), that "... the extension was not built until 1920–1 when Reform Street was extended northwards around the east and north sides of the recreation ground, connecting with St James’s Grove." All this suggests that the photo was taken facing north and hence that the statue faced south.

Wikipedia has other images showing the same view of the monument but with different backgrounds. On close examination these seem to be photo-montages, where the image of the monument has been manually cut out and pasted on top of another image. Seems odd, but perhaps this was done when the papers reported the removal of the statue.

Our photo of the site today, 2018, shows the railings still in situ, and on the ground near the centre of the space we spotted a utility access cover which could be a leftover from the water supply necessary for the fountain.

This section lists the subjects commemorated on the memorial on this page:
Brown Dog statue - original - lost

This section lists the subjects who helped to create/erect the memorial on this page:
Brown Dog statue - original - lost

Dias rests his right hand on a cross which tops what appears to be a lighthou...