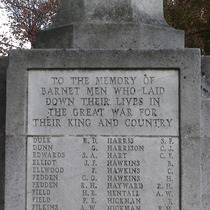 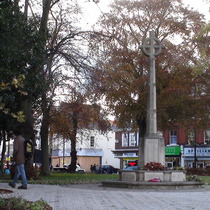 {The 275 WW1 names are on stone plaques inlaid to the 4 sides of the plinth.
On both the west and east face, above the names:}
1914   1918 {with shield carrying 'ISH' the Greek initial letters for "Jesus God Saviour"}

{On the south face above the names:}
To the memory of Barnet men who laid down their lives in the Great War for their king and country.

{On the north face above the names:}
See that ye conquer by living as we have conquered by dying.

{The solution to the problem of how to add the 149 WW2 names was solved by attaching smaller plaques to the 8 upright sides of the base below the plinth, plus one more plaque on the north side, even lower down.}

{See the Subjects commemorated for the lists of names.}

The instruction "See that ye conquer by living as we have conquered by dying" sounds like a quote but we can't locate it.

The WW1 names are in alphabetical sequence with the exception of Hoare which is added at the end.  The WW2 names are also in alphabetical sequence with the exception of 12 names added out of sequence at the end, clearly more than they were expecting since they had left space for only 2 on the last of the 8 plaques and had to add an extra plaque for the other 10.  These late additions are: C. H. Norman, F. Smith, F. A. Brett, R. K. T. Coate, R. E. Cox, R. S. Earl, G. F. W. Gibbins, A. Greaves, J. H. C. Hunt, D. Pollard, A. G. Sturrock, A. J. Smith.   The position of the WW2 names means that some are weather-beaten and we are uncertain of some of the initials, especially those pesky Gs and Cs.  Again - we've done our best.

2013: In the lead-up to the centenary of WW1 the War Memorials Trust is acting as a central communication point for a nationwide project to repair war memorials where necessary, so we let them know of any we come across in need of some TLC.   Their response regarding this one is that they believe repairs are currently being planned.

We also learnt from the WMT that this memorial is known as the “Wheel Cross”. We were puzzled by this, thinking it had some local connection, but Margaret Wright has written pointing out that the top of the cross has a stone circle, or wheel, carved there.   And we now find there is a Wikipedia entry for this symbol, the sun cross or wheel cross, dating back to prehistory.  We should have followed our own advice about London, or cities generally - “look up”.

Barnet Genealogy reports the Barnet Official Guidebook of c.1927 saying "this memorial is inscribed with the names of 246 Barnet men who laid down their lives in the Great War" whereas we transcribed 275 WW1 names, with only 1 out of sequence and therefore possibly a late addition.  We can't explain the near-30 discrepancy.

This section lists the subjects commemorated on the memorial on this page:
Barnet war memorial

Barnet men who died in WW1

Barnet men who laid down their lives in the Great War for their king and coun...