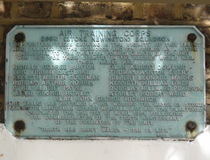 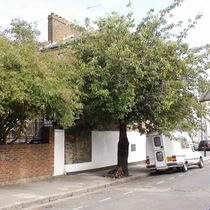 Air Training Corps - 296th (Stoke Newington) Squadron
The thirteen trees growing in the vicinity of this tablet were planted by the Squadron and its friends as a living memorial to the thirteen former cadets of the unit who died for their country in the second world war. Their names are {13 names in alphabetical sequence. See Subjects commemorated for the names.}
This tablet was unveiled by his worship the Mayor of Stoke Newington (Alderman Edward Norvall, JP) and the plantings were completed the 15th day of April 1951, following the commemoration of the tenth anniversary of the formation of the unit.
"Death has many names - one is life" Eric MacKay

At the War Memorials Register we learn that, since we visited, laminated signs have been attached to the cages around the 13 trees, giving some information about each of the men, and some of, the trees have been replanted. Using the photographs at that site we have transcribed some additional information about each man onto their individual pages.

Andrew Behan has researched all these men and found that although they all served during the war, three died after the war had finished.

The Corps is based in Albion Road close to these trees.

This section lists the subjects commemorated on the memorial on this page:
ATC 296 (Stoke Newington) WW2

This section lists the subjects who helped to create/erect the memorial on this page:
ATC 296 (Stoke Newington) WW2

The Wikipedia entry for Mackay is worth a read - it's short and not kind; des...

Unveiled as part of the 50th anniversary of Jamaican independence.

Eight feet of ground from the stone of this house were given by the Mercers' ...

We believe a 2-horse carriage pole is the long horizontal bar between the pai...