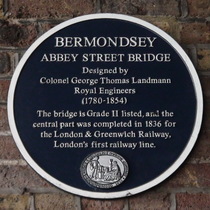 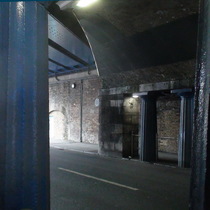 The plaque is on the north side of the western entrance to the tunnel.

A greatly enlarged etching of the bridge in 1835 has been placed on the wall opposite the plaque. It shows a much shorter tunnel with only four pairs of pillars between stone piers whereas now there are twelve, plus a section (shown in our photo) with none. We take that to mean that tracks have been added to the railway system above and that initially the tunnel was extended, pillars and all, but on the last occasion it was decided that was just too expensive.  Note: The etching is labelled Neckinger Road which was the name of this street until 1912.

There are similar colonnades of blue pillars at the nearby Spa Road bridge and at Holyrood Street but at this last the columns are not fluted.

This section lists the subjects commemorated on the memorial on this page:
Abbey Street Bridge

Army officer and engineer. Born Woolwich, the son of a professor at the Royal...

The first steam railway to have a terminus in London. Originally it ran, larg...

This section lists the subjects who helped to create/erect the memorial on this page:
Abbey Street Bridge

London County CouncilIn a house on this site Florence Nightingale, 1820 - 191...

Her Majesty was on the first train through the tunnel on its official opening...