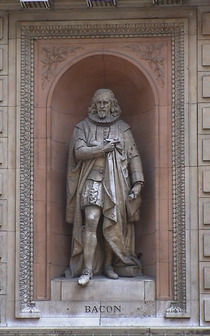 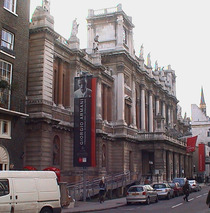 There are 22 statues on the façade of this building. Each is labelled with his (always 'his') surname. There are 12 at the top up against the sky (which don't photograph very well), listed left to right: Galileo, Goethe, La Place, Galen, Cicero, Aristotle, Plato, Archimedes, Justinian, Hunter, Hume, Davy. There are 10 lower on the building: Leibnitz, Cuvier, Linnaeus, Newton, Bentham, Milton, Harvey, Adam Smith, Locke, Bacon. Newton, Bentham, Milton, Harvey represent: Science, Law, Arts and Medicine. The others are in groups representing: ancient culture, illustrious foreigners, and English worthies. British History reveals who is which. Shakespeare isn't missing - he was given pride of place on the internal staircase.

This section lists the subjects commemorated on the memorial on this page:
6 Burlington Gardens - Bacon

This section lists the subjects who helped to create/erect the memorial on this page:
6 Burlington Gardens - Bacon

This section lists the other memorials at the same location as the memorial on this page:
6 Burlington Gardens - Bacon