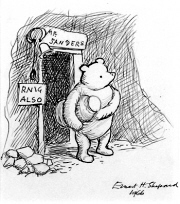 Children's storybook character. The creation of A.A. Milne, inspired by the teddy bear, made in Acton, belonging to his son Christopher Robin. The toy was named 'Winnie' after a Canadian black bear at London zoo, and 'Pooh' after a swan the family had met while on holiday. The first collection of stories about him appeared in 'Winnie the Pooh' in 1926 and was followed by 'The House at Pooh Corner' in 1928. The original illustrator was E.H. Shepard, but, sadly perhaps, his interpretation has been superseded in the public mind by the Walt Disney version.

This section lists the memorials where the subject on this page is commemorated:
Winnie the Pooh

Represented the Sunday School of the Highbury Quadrant Congregational Church ...