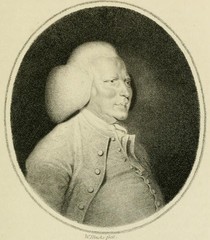 Drawing master, social reformer and inventor. Wikipedia's page differs significantly from the Oxford Dictionary of National Bigraphy. They agree that he was born in Kent and trained as a painter. He was in Northampton c.1747 -51, where he was active in the Northampton Philosophical Society.  He set up a very successful drawing school near Fountain Court 1754 - 61. From this activity grew the idea of a Society for the Encouragement of Arts, Manufactures, and Commerce, founded by Shipley in 1754, with support from Lord Romney (1712–1794), which later became the Royal Society of Arts.

Shipley held posts in the Society until 1760 after which he remained an active member. Married in 1767 and retired to Maidstone the following year, but still frequently attended meetings in London and received recognition for a number of inventions (including a method to damp-proof shoes with tin foil). In Maidstone, again with support from Lord Romney, whose country seat was there, founded a local institution, similar to the London society. 1791 he was elected a fellow of the Linnean Society of London but he resigned in 1796  'having scarce been in London since that time".

Born and died Maidstone, Kent. No date of birth is known so we have given the date of baptism instead.

This section lists the memorials where the subject on this page is commemorated:
William Shipley

This plaque commemorates the tercentenary of Shipley's birth and the site of ...

From their website: Create London commissions art and architecture in the pub...