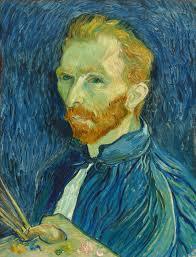 Vincent came to London in June 1873 aged 20 as an art dealer, in the firm Goupil. He was in England for two and a half years during which he had two short periods working in the Paris branch. Goupils were in Southampton Street and then the nearby Bedford Street, both off the Strand. He was not good with the customers and was too open with his opinions of the art so in Spring 1876 he was sacked.

When he first arrived in England he very quickly found lodgings in Hackford Road, Brixton. His letters reveal that he walked a lot in London and would walk daily from home to his work, crossing Westminster Bridge twice a day, in a top hat, the whole journey being done in a very fast 45 minutes. The view from this bridge prompted him to write about how he loved London.

He fell in love with his landlady's daughter but she rejected him and married another lodger. It was while he was in London that he started drawing, although at that time he had no stated ambition to become an artist. It was also while here that he gave his first sermon, at the Richmond Methodist Church. His obsession with religion and his depression may have contributed to his dismissal from Goupils. This happened during one of his Paris periods and he decided to return to England. He found a job for a month as a teacher in Ramsgate and then relocated with the school to Isleworth. He then briefly worked in a church but he left England for good at Christmas 1876.

See Making a Mark for a map showing all his London locations.

KentAlive has details of the house in Ramsgate where van Gogh stayed, aged 23.

Born in the southern Netherlands. Committed suicide in Saint-Rémy, in the South of France.

This section lists the memorials where the subject on this page is commemorated:
Vincent van Gogh