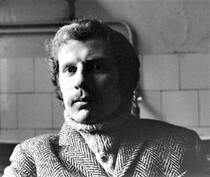 Married to Anna Coates, his Wikipedia page gives details of his life and our picture source gives many examples of his photographic work.

Probate records confirm that his home address was 123 Leroy Place, Nob Hill, San Francisco, California, 93109, USA and that he died on 13 March 1972 in the Royal Marsden Hospital, 203 Fulham Road, London, SW3 6JJ, his body being cremated on 18 March 1972 in the Royal Borough of Kensington and Chelsea. Administration of his estate was granted on 20 July 1972 and his effects totalled £4,105.

This section lists the memorials where the subject on this page is commemorated:
Tony Ray-Jones