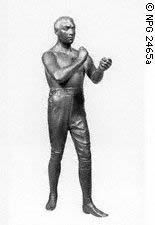 Boxer Born Pimlico. Worked as a bricklayer building King's Cross Station. Became the first "world champion" boxer. Defeated only once, in a fight that lasted 61 rounds. His 1860 fight with the American John Heenan lasted 37 rounds at the end of which his arm was found to be broken. The fight was declared a draw.
Died at the home of a friend in Camden High Street. His burial at Highgate Cemetery is said to have been attended by ten thousand people, and his dog Lion, whose statue appears on the grave.

This section lists the memorials where the subject on this page is commemorated:
Tom Sayers

Round Table The neighbourhood of St. Martins Lane was, in the middle of the ...

Oarsman. Born William Nicoll Duthie Kinnear at Balmanno in the Parish of Mary...