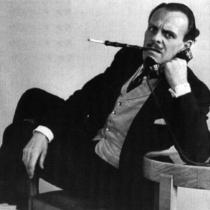 Comic actor, born as Thomas Terry Hoar-Stevens in Finchley, Middlesex. He performed with the Entertainments National Service Association (ENSA) during World War II and went on to work on radio and television. He rose to fame through a number of Boulting brothers' films, usually playing caddish roles, with catchphrases such as 'you're an absolute shower!'. Diagnosed with Parkinson's disease in the 1970s, he was reduced to living in near poverty until a benefit concert was held for him. He died at the Busbridge Hall Nursing Home in Godalming, Surrey.

This section lists the memorials where the subject on this page is commemorated:
Terry-Thomas

Writer, actor, director and comedian. Born in Ilford, Essex. Described as one...