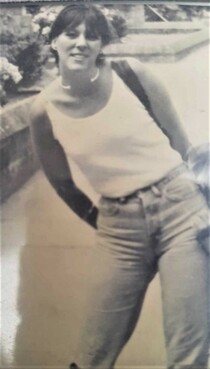 Our colleague, Andrew Behan, believes this is the person named on the tree. Stephanie Patricia Ford was born on 22 June 1963. Her birth was registered in the Westminster registration district. She was the daughter of Arthur John Howard Ford (1942-2004) and Jean Antoinette Elizabeth Ford née Mayers (1943-2015).

She died, aged 39 years, her death being recorded in November 2002 in the Camden registration district.

This section lists the memorials where the subject on this page is commemorated:
Stephanie Ford

The quotations are from Gibran's The Prophet. The tree is decorated with plas...

A North London Railwayman who fell in the Great War.