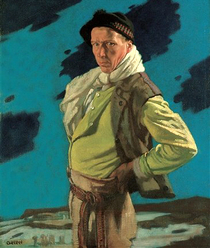 From:johncoulthart: ". . the model for Eros was one Angelo Colarossi whose f...

We believe this is a mural producing company.