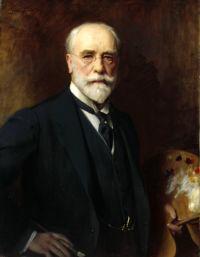 Illustrator and portrait painter. Born Samuel Luke Fildes at 22 Standish Street, Liverpool. He became known as a woodcut designer for magazines such as 'The Graphic', the first issue of which included pictures of homeless people. He also illustrated the first published chapters of Charles Dickens' unfinished last novel 'The Mystery of Edwin Drood'. Although relatively unknown nowadays, he must have been famous enough in his time, as he is mentioned in Gilbert and Sullivan's penultimate operetta 'Utopia Limited'. Died at his home, 11 Melbury Road, Kensington.

This section lists the memorials where the subject on this page is commemorated:
Sir Luke Fildes

Artist who specialises in large-scale murals.