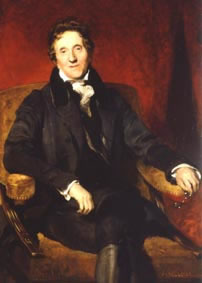 Architect and collector. Born in Goring-on-Thames, son of a bricklayer. Architect of the Bank of England, the Dulwich Picture Gallery, St. John’s, Bethnal Green and his own tomb. He also rebuilt much of Pitzhanger Manor, Ealing, which he had bought in 1801 as a country home and as a place where he could teach architecture to his two sons. They turned out not to be interested or capable enough (they were also unsatisfactory just as sons) and he sold it in 1810. Died at home 13 Lincoln's Inn Fields.

We must have initially mistyped "Born in Goring" as "Bornin Goring" because when we revisited this page we discovered that, for 6 years, it had been auto-corrected to "boring Goring". We apologies to all Goring-on-Thames residents.

This section lists the memorials where the subject on this page is commemorated:
Sir John Soane, R.A. F.R.S.

This section lists the memorials created by the subject on this page:
Sir John Soane, R.A. F.R.S.

Architect, Born Henry Louis Florence. 1875 he is credited with Stourbridge &a...