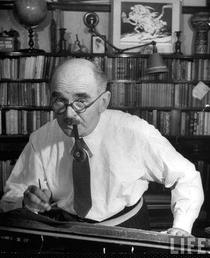 Cartoonist and caricaturist. Born David Alexander Cecil Low in Dunedin, New Zealand. He worked for several newspapers, before coming to London and joining the 'Star'. In 1927 he moved to the Evening Standard, where he produced some of his most successful work. During World War II, his cartoons satirising Adolf Hitler resulted in Low being put on the black list of people to be arrested in the event of a successful German invasion of Britain. His Colonel Blimp character has become part of the English language. Knighted in 1962, he died in hospital in London.

This section lists the memorials where the subject on this page is commemorated:
Sir David Low