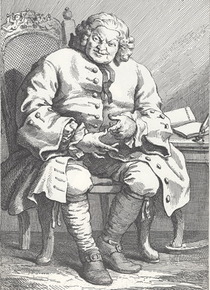 Jacobite. Taken prisoner at the Battle of Culloden. Tried and was the last man to be beheaded on the Tower Hill scaffold. We're sure that made him feel a lot better about it.

2017: The Scotsman reports a theory that Lovat's body was not actually interred at the Tower of London Chapel, St Peter ad Vincula (the official story), but "was quickly moved by supporters and brought home to the Highlands" and is "at Wardlaw Mausoleum at Kirkhill near Beauly - the burial place of Clan Fraser of Lovat", in a coffin held there "with the coffin plate for Lord Lovat as it appeared in a London newspaper following the execution". They will exhume the body and look for "cut marks that confirm beheading". A spokesperson is quoted "“Getting DNA would be the nail in the coffin”.

2018: The Scotsman reports that the body at Kirkhill is not Lovat and so his body probably is in the Tower. Also Inverness Courier.

This section lists the memorials where the subject on this page is commemorated:
Simon Fraser, Lord Lovat

The 13th (Service) battalion of the East Surrey Regiment. Raised in the Borou...

Born Colchester. Fought in both world wars. Chief of the Imperial General Sta...

Financier and horticulturalist. He was born on 2 January 1916 in Westminster...

Knowing that America would eventually enter the war, and inspired by stories ...