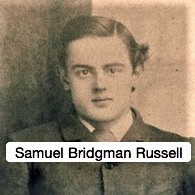 Architect. Father of Robert Tor Russell who designed some notable buildings in the development of New Delhi.

Despite the information contained on his Wikipedia page (2021) that he was a Scottish architect, his birth was registered in the 3rd quarter of 1864 in the Newington registration district, Surrey. Samuel Bridgman Russell was born on 9 August 1864, the fourth of the six children of Jacob Russell (1830-1868) and Maria Luscombe Russell née Bridgman (1835-1922). His father was a jeweller.

In the 1871 census he is shown as a scholar, living at 307/309 Walworth Road, Newington, Lambeth, with his widowed mother and his sister Frances Matilda Russell (b.1868), together with a nurse. His mother's occupation was recorded as a pawnbroker & silversmith.

The 1881 census describes him as an architect living at 97 Angell Road, Brixton, Lambeth, with his mother and four siblings: Hannah Mary Russell (1860-1949), Jacob William Bridgman Russell (1863-1904), Sarah Lilian Russell (b.1866) and Frances Matilda Russell, together with a cook and a housemaid.

When the 1891 census was taken he was described as an architect residing at 26 Foulser Road, Tooting Bec, Streatham, with his wife and their son Robert Tor Russell. Also on the night of the census there were two visitors, his architect partner, James Glen Sivewright Gibson (1861-1951) and his wife Kate R Gibson.

His wife died in 1896 and on 26 September 1900 he married Louisa Eleanor Susan Nunn (1866-1944) at St James' Church, Buxton, Derbyshire where the marriage register shows him as a widower living at 17 Hope Park, Bromley, Kent, whilst she was recorded as a spinster residing at 7 Darwin Avenue, Buxton.

He was still shown as a architect living at 17 Hope Park, Bromley in the 1901 census with his wife and the four children from his previous marriage, together with a female domestic servant. When he completed his 1911 census return he still described himself as an architect living in a nine roomed house at Black Horse Lane, Gosmore, Hitchin, Hertfordshire, with his wife, his son Robert Tor Russell and his daughter Margaret Elizabeth Russell.

Telephone directories from 1930 to 1939 list his business at Churchyard, Hitchin, Hertfordshire, but the 1939 England and Wales Register shows him and his wife residing at Newlands Lane, Hitchin. Probate records for his wife confirmed their address as 2 Newlands Lane, Gosmore, Hertfordshire and that she died on 30 August 1944. Probate was granted to his son Robert Tor Russell and to his daughter Margaret Elizabeth Hale who by then was a widow. His wife's estate totalled £1,976-15s-10d.

He died, aged 90 years, on 2 August 1955. Probate records show his address remained as 2 Newlands Lane, Hitchin, Hertfordshire and that when probate was granted to his daughter Phyllis Annette Russell on 22 August 1955 his effects totalled £1,133-16s-0d.

This section lists the memorials created by the subject on this page:
Samuel Bridgman Russell

Robert Atkinson & A. F. B. Anderson

Architect. Born Brighton (though the picture source has him born in Scotland)...