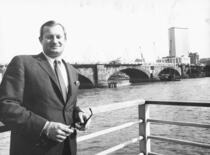 American entrepreneur from Missouri, best known for McCulloch chainsaws and for purchasing London Bridge, which he moved to Lake Havasu City, Arizona - one of the cities he founded. He purchased it in 1968 as a unique attraction for his city. The removal and rebuild took 3 years.

Died in Los Angeles, of an accidental overdose of alcohol and barbiturates.

At the Picture source our image is captioned: "Robert McCaulloch {sic} standing in front of London Bridge as it is dismantled in 1968."

This section lists the memorials where the subject on this page is commemorated:
Robert P. McCulloch

Unveiled by the Duke of Gloucester, this is actually an "interpretation panel...

"The poetical antiquary", bibliographer and engraver. He published his own ...

Investigating the magpie plaque at the New Cross V2 bomb site we found the pi...