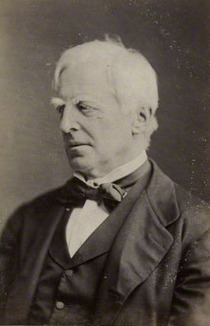 Politician.  Born Nottinghamshire.  An albino, he suffered poor and deteriorating eyesight so emigrated to Australia  in 1841 in the hope of making a quick fortune before going blind.  There he established himself as a lawyer and newspaper writer.  Returned to England in 1850, wrote for The Times and became an MP.  Home Secretary under Gladstone.  His proposal to impose a tax on matches failed.  Keen on physical activities, according to Margaret Baker, while out cycling in Kenley he fatally injured a greengrocer.  His first marriage was unhappy.  Only 4 months after her death he married again, to Caroline.  No children from either marriage.  Died at home, Sherbrooke Lodge, Warlingham.

This section lists the memorials where the subject on this page is commemorated:
Robert Lowe, Viscount Sherbrooke

We again thank David Hopkins for the Latin transcription (from some tortuous ...

Statesman. Born Lancashire. Previously known as the Marquess of Hartington,...

Born in London or Kent.  Principle Secretary and 'Spymaster' to Queen Elizabe...