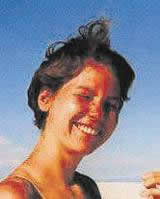 Killed by a tipper lorry on a Monday 8.30 am on his daily cycling commute fro...