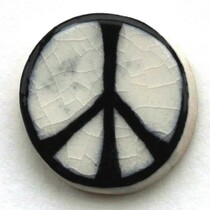 Designed by Gerald Holtom as a nuclear disarmament logo for the first Aldermaston March, which took place Easter, 4–7 April 1958.

From the Hackney Gazette: "Gerald had first presented the symbol to his colleagues at the Direct Action Committee against nuclear war (DAC) on February 21, 1958, above the Fish and Cook Stationers in Blackstock Road." This conflicts with Wikipedia which says that Holtom took the design to "his local anti-nuclear group in Twickenham".

Holtom would say his inspiration came from images of people in despair but it can't just be coincidence that the overlaid semaphore symbols of "N" and "D" would form this symbol.

The logo was quickly adopted by the Campaign for Nuclear Disarmament and, since Holtom did not copyright the design, it was used worldwide to represent the desire for nuclear disarmament, and more generally, peace. It is one of the most widely recognised designs in history.

This section lists the memorials where the subject on this page is commemorated:
Peace symbol

Artist and craftsman. Born Lewes. 1825 moved to London and married his cousin...