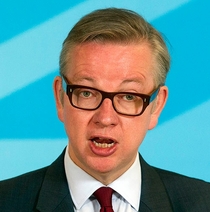 Politician. Born in Edinburgh. He entered parliament in 2005, and in 2010 after the formation of the coalition government, was appointed Secretary of State for Education. He was criticised by the conference the National Association of Head Teachers, whose members condemned the climate of bullying, fear and intimidation they said he had created, and passed a vote of no confidence in his policies. In 2014 he was moved to the post of Chief Whip, and following the 2015 general election was promoted to the dual offices of Lord Chancellor and Secretary of State for Justice.

This section lists the memorials where the subject on this page is commemorated:
Michael Gove

Not surprisingly, this plaque has been removed. We believe it was affixed to ...

Founded the United Wards Club and fought to have the Bell Inn plaque erected....