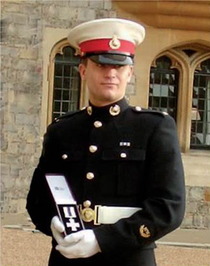 Born and grew up in Hammersmith. Joined the Royal Marines, served his first tour of duty in Afghanistan in 2009 and was award the MC. Killed in Afghanistan, aged 28.

Andrew Behan has kindly provided this research: Marine Samuel Giles William Alexander M.C., was born on 16 June 1982 in Hammersmith, the son of Stuart Alexander and Serena M. C. Alexander née Kirby. His elder sister, Sophie Mary A. Alexander was born in 1980. He joined the Royal Marines in July 2006, Service Number P065042N and was passed fit for duty in October 2007. On completion of his training he was appointed to the Fire Support Group in Mike Company, 42 Commando Royal Marines.

He later moved to Kilo Company and was deployed on Operation HERRICK 9, during which, in 2009, he was awarded the Military Cross for gallantry. He charged down a group of insurgents to draw fire away from an injured colleague. Having used all the ammunition in his machine gun, he continued his assault with his 9mm pistol until that too was empty - forcing the enemy to retreat. The citation for his award said he carried out his brave actions "despite being completely exposed to heavy and accurate enemy fire".

He married Claire Louise Wills in 2009 and in 2010 their son Leo Alexander was born. On his return from operations he trained as a Heavy Weapons (Anti-Tank) specialist and was appointed to Juliet Company, before returning to Afghanistan for Operation HERRICK 14.

He was on patrol with Lieutenant Oliver Richard Augustin in the Loy Mandeh area of the Nad-e Ali district in Helmand province, Afghanistan, on 27 May 2011 when they were both killed by an Improvised Explosive Device. He was aged 28 years. He was buried on 17 June 2011 in St Mary's Churchyard, Bickleigh, Tiverton, Devon, EX16 8RB.

This section lists the memorials where the subject on this page is commemorated:
Marine Sam Alexander

Unveiled by the mayor of Hammersmith and Fulham, Frances Stainton. The quote...