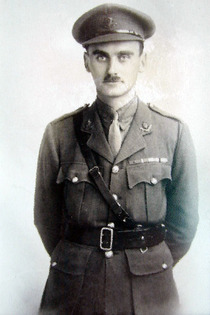 During the period 22 March/2 April 1918 west of Somme and at Pargny, France, Lieutenant Colonel Roberts showed exceptional military skill in dealing with the many very difficult situations of the retirement and amazing endurance and energy in inspiring all ranks under his command. On one occasion the enemy attacked a village and had practically cleared it of our troops when Colonel Roberts got together an improvised party and led a counter-attack which temporarily drove the enemy out of the village, thus covering the retirement of troops on their flanks. The success of this action was entirely due to his personal valour and skill.

This section lists the memorials where the subject on this page is commemorated:
Major General Frank Roberts VC

{Below an image of a Victoria Cross medal:} Lieutenant Colonel Frank Roberts,...