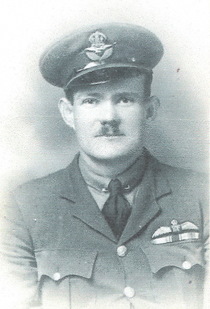 Hero. R.A.F (South African Artillery). On 27 December 1919 he dived into the Thames from the upstream footway of Hammersmith Bridge and saved a drowning woman. He contracted tetanus as a consequence of his injuries and died two weeks later.

Our colleague Andrew Behan has carried out further research, as follows:

The photograph is part of Record No.7786 of the Royal Aero Club Aviators' Certificates, now held in the care of the Royal Air Force Museum, Hendon. These records show that he was born on 8 December 1891 in Bloemfontein, Orange Free State, (now South Africa). His nationality is shown as British and his address as P.O. Box 2857, Johannesburg, South Africa. Under the 'Rank, Regiment, Profession' category, he is shown as '2nd Lieut., General List'.

He is recorded as having been awarded the 1914-15 Star as he had first been a Private in the South African Medical Corps, his qualifying date for the medal being 7 September 1914 and his Theatre of War was German West Africa. He later became a Lieutenant with 9th Brigade, Royal Air Force.

The National Army Museum  keep registers of service personnel and these show him listed as a Flying Officer with the Royal Air Force at the time of his death and that in 1921 his effects totalling £14-9s-3d were forwarded on to his mother, Mrs Grace Ellen Wood, in Cape Town, South Africa.

On a personal note, I remember seeing this plaque in the 1950's when I was young lad growing up in Hammersmith. I always thought how sad it was that someone who had come from South Africa to help in the Great War and survived, should lose his life in such tragic circumstances, unselfishly and heroically trying to help another in distress. It was this plaque that started my interest in plaques ever since. I've often looked over the years to see if there was any more information anywhere about the man, local library, newspapers, etc., but without success, so it was a real pleasure to be able find his photograph and some background information about him. It would be interesting to know who paid for this plaque to be affixed to the bridge. Was it his mother, his brother flying officers? Who knows. It has nearly been a hundred years.

This section lists the memorials where the subject on this page is commemorated:
Lieutenant Charles Campbell Wood