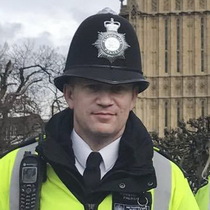 From the Police Memorial Trust: "PC Palmer, though unarmed, stopped a knife-wielding terrorist from entering the Palace of Westminster during the 2017 Westminster attack; he died from wounds he received in this attack" and he was posthumously awarded the George Medal.

Our picture source gives a biographical account of this police officer and from the Find a Grave website we learn that his body was cremated after his funeral service at Southwark Cathedral.

This section lists the memorials where the subject on this page is commemorated:
Keith Palmer

There are conflicting records as to this fireman's middle name, i.e. Roberto,...

Trustee of The Memorial Gates Trust. In addition to our Picture Source and h...