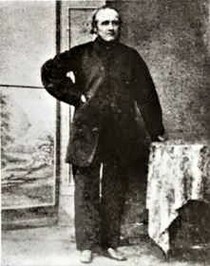 John Redington was born on 9 November 1819 in Bethnal Green, the eldest of the seven children of John Redington (1796-1848) and Mary Ann Redington née Hicks (1798-1873). On 15 May 1820 he was baptised in St Matthew's Church, Bethnal Green, where the baptismal register shows his father to have been a printer and that the family were living in Cold Arbor Street, Bethnal Green, a street we cannot identify.

The 1851 census shows him as a printer, stationer, compositor and tobacconist, living at 208 Hoxton Old Town, Shoreditch, with his wife and son, John. In the 1861 census he was described as a compositor, still residing at 208 Hoxton Old Town, with his wife, their son John who was shown as a printer & compositor and their other two surviving children, Eliza and William. As a dealer in miscellaneous articles, he opened a theatrical print warehouse at 73 Hoxton Street. See Pollock's toy theatre shop for the progress of this business.

When the 1871 census was compiled he is shown as a printer & compositor, living at 73 Hoxton Street, Shoreditch, with his wife and two of their children, Eliza and William.

Probate records confirm that he died, aged 56 years, on 19 October 1876 at 73 Hoxton Street and that when his will was proved on 9 November 1876 by his sister-in-law, Jane Dewey of 8 Baxendale Street, Shoreditch, who was his sole executrix, his effects were listed as under £600.

This section lists the memorials where the subject on this page is commemorated:
John Redington

VD, JP.  Son of James Bevington.   A member of the Bermondsey leather manufac...