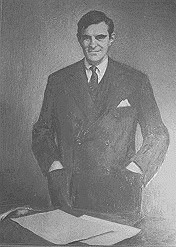 United States ambassador to Great Britain 1941-46. Born New York City. Succeeded the pro-appeasement ambassador, Joseph Kennedy, Winant was with Churchill when news arrived of the attack on Pearl Harbour. Married with children, he had an affair with Sarah, Winston Churchill's second daughter.

On the day his book 'Letter from Grosvenor Square' was published he committed suicide by shooting himself in the head, at his home in Concord, New Hampshire.

This section lists the memorials where the subject on this page is commemorated:
John Gilbert Winant

Winant House A tribute to Londoners courage;  a reminder of two countries nev...