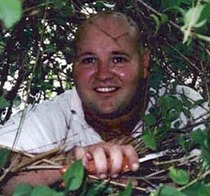 Jeremy Mark Carrington was brought up in Essex and moved to New York, USA, in 1989.

On 26 February 1993 he was working in the North Tower, 1 World Trade Centre, New York, when it was subject to a terrorist attack. A truck laden with a bomb exploded in the underground car park and he led his colleagues down 30 floors to escape.

In 2000 he married his wife, Patricia Rosch Carrington.

He was a Swops Trader for Cantor Fitzgerald and died, aged 34 years, on 11 September 2001 whilst working on the 105th floor of the North Tower, 1 World Trade Centre, New York, USA.

This section lists the memorials where the subject on this page is commemorated:
Jeremy Mark Carrington

Aged 46, killed by a burglary gang fighting their way out of a building in Cu...