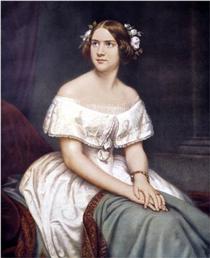 Singer. Born Johanna Maria Lind at 40 Mästersamuelsgränd, Stockholm. Her operatic fame began when she sang the role of Agathe in Der Freischütz. She was appointed court singer and made a member of the Royal Swedish Academy of Music. By the time she was twenty her voice was seriously impaired through overwork, but was saved by intense tuition with Manuel Garcia. She went on to perform all over Europe, becoming known as the 'Swedish Nightingale'. The American showman P.T. Barnum persuaded her to embark on a two year tour of the U.S.A. She married the pianist and conductor Otto Goldschmidt in 1852, and despite much pressure, she never returned to the operatic stage. Died at Wynd's Point, Malvern.

This section lists the memorials where the subject on this page is commemorated:
Jenny Lind

Conductor, nick-named "Flash Harry" in recognition of his dapper appearance a...