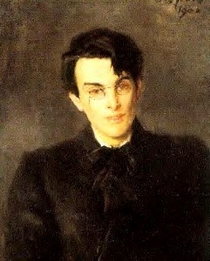 Artist. Born John Butler Yeats (to a father with the same name) at 23 Fitzroy Road NW1. Known as Jack B. (he never used the name Butler). He grew up in Sligo and moved back to London, where he worked as a magazine illustrator. He progressed into expressionist art, specialising in paintings of the Irish landscape, horses, circus and travelling players. Unusually, he holds the distinction of being Ireland's first Olympic medallist, following independence, at the 1924 games in Paris. The silver medal was awarded, not for any athletic prowess, but for his painting 'The Liffey Swim' in the arts and culture segment, which was a feature of the games from 1912 to 1948. Died in Portobello Nursing Home, Dublin.

This section lists the memorials where the subject on this page is commemorated:
Jack B. Yeats

foundation of the Barbican Arts Centre

Painter. Born Belfast. One of the "Glasgow Boys" he went on to become a suc...