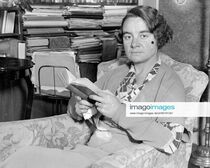 Bolton joined the Fabian Society in 1916, and became private secretary to Beatrice and Sidney Webb. She then became secretary of the Fabian Local Government and Research Bureau, and assistant editor of Local Government News, and served on the society's executive committee. At the London County Council election, 1934, Bolton was elected as a Labour Party candidate in Hackney North. She held the seat and its successor, Stoke Newington and Hackney North, until 1952. That year, she became an alderman, and she was chair of the council in 1953/54. When the council was dissolved, in 1965, she retired.

Elected as Vice-Chairman of London County Council in 1953 (April, we think). The Chair (A. E. Middleton) died on19 October and on 2 November Bolton was elected Chairman in his place.

The image is dated 29 October 1934 and captioned: "A woman for the first time is to act as one of the London County Council's six representatives on the London and Home Counties Joint Electricity Authority - she is Mrs I M Bolton who was formerly secretary and research worker to Lord Passfield {Webb} and Mrs Sidney Webb - she became a member of the LCC for North Hackney last March and is a Labour candidate for the Hampstead Borough Council (Belsize Ward) - photo shows Mrs I M Bolton after the announcement of her appointment."

Our colleague, Andrew Behan, researched this lady and confirmed her dates of birth and death. She used the name of Ivy Molly Bolton professionally, but she was born Ivy Mabel Schmidt on 26 January 1897, the elder daughter and second of the three children of Leonard Schmidt and Alice Schmidt née Algar. On 4 April 1897 she was baptised in the Parish of St.Andrew, Haverstock Hill, Middlesex and the baptismal register shows the family living at 11 Queen's Crescent, Kentish Town and that her father was a hairdresser.

The 1901 census states that the family were residing at 135 Samatra Road, Hampstead, and they were still there at the time of the 1911 census.

In 1922 she married Douglas Joseph Bolton, B.Sc., A.M.I.E.E. (1890-1983) in St Albans, Hertfordshire. He was a lecturer of electrical instruments at the Regent Street Polytechnic, London.

Electoral registers from 1932 show them living at 34 Compayne Gardens, Hampstead, and they were still there at the time that the 1939 England and Wales Register was compiled.

The 1945 telephone directories list her husband at 22 Crediton Hill, London, NW6. and when he died on 11 November 1983 probate records show his address as 20 Reynolds Close, Hampstead Garden Suburb, London, NW11. His effects totalled £61,020.

She died on 2 January 1991 and probate records confirm her name as Ivy Mabel Bolton and her address to have been 71 Heathcroft, Hampstead Way, London, NW11. Her effects totalled £257,760.

This section lists the memorials where the subject on this page is commemorated:
Ivy Molly Bolton

6th Earl of Leicester. Born France, with connections to French and English ar...

Claudius George Algar was the elder child of Walter Algar (b.1830) and Mary A...