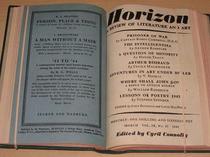 An influential literary and art magazine. From a pdf issued for the unveiling: "... Stephen Spender joined Cyril Connolly and the wealthy patron Peter Watson in 1939 to set up Horizon at 6 Selwyn House, 2 Lansdowne Terrace, using the two ground floor rooms of his {Spender's} rented apartment as editorial offices for the magazine. Horizon was edited by Cyril Connolly, who made it into a platform for a wide range of distinguished and emerging writers .... It had a print run of 102 issues or 20 volumes. Spender served as associate editor from 1939 to 1941, although he continued making contributions after that." "Sonia Brownell met George Orwell through the magazine and later married him."

Many of these are artists but the format of the magazine does not look picture-friendly. Is it possible that all these artists wrote articles for Horizon?

This section lists the memorials where the subject on this page is commemorated:
Horizon Magazine

Radical journalist, secularist and promoter of the Co-operative Movement. Bor...