He was serving in D Company of the 1st Battalion, Royal Fusiliers (City of London Regiment), service number 22583039, when he was reported missing, presumed killed in action, aged 19 years, on the night of 24/25th November 1952 whilst participating in Operation Pimlico in the Korean War.

As he has no known grave he is commemorated on the Memorial Wall in the United Nations Memorial Cemetery, Tanggok, Pusan (now called Busan), Korea. He is also commemorated on the Ministry of Defence Roll of Honour. and on the Armed Forces Memorial at the National Memorial Arboretum, Croxall Road, Alrewas, Lichfield, Staffordshire, DE13 7AR.

This section lists the memorials where the subject on this page is commemorated:
Fusilier Geoffrey Frederick Allen 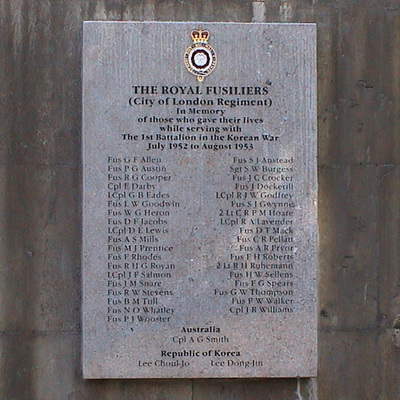