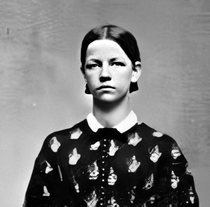 Elizabeth "Long Liz" Stride is believed to have been the third victim of the unidentified serial killer known as Jack the Ripper.

Born Elizabeth Gustafsdotter near Gothenburg in Sweden. She was only five foot five inches tall at most, so her nickname was ironic. Moved to London in February 1866, and married John Stride on 7 March 1869. They ran a coffee shop for some time, but the marriage deteriorated. Stride left her, and she was reduced to living in workhouses. She later said that her husband and two of her nine children had drowned in the 1878 sinking of the Princess Alice. The story was that she and her husband had worked on the ship, and she had survived by climbing the mast.

She had been a prostitute in Sweden, and eventually returned to sex work in order to survive. On the evening of 29 September 1888 she was seen with several acquaintances or clients, and her body was discovered at approximately 1am the following morning in Dutfield's Yard, off Berner Street, which has since been renamed as Henriques Street and largely rebuilt.

It has been suggested that she was not actually a Jack the Ripper victim, although the fact that her murder was discovered less than an hour before that of Catherine Eddowes, in the same vicinity and with the same mutilations, would seem to contradict that.

This section lists the memorials where the subject on this page is commemorated:
Elizabeth Stride